Sarah has been a school governor for 12 years, a chair for 6 years and a National Leader of Governance for 3 years. She also has held the position of NLG Coordinator for Derby and Derbyshire since September 2017.  This involves supporting the work of the (currently) 11 NLGs across the county and liaising with commissioners of this work, including Teaching School Alliances, MATs and Local Authorities.

Professionally she specialises in leadership, team and cultural development and is dedicated to helping people work more effectively and collaboratively together.  She feels this is crucial for excellent governance and a productive, high-trust working relationship between school leaders, staff and governors.

Sarah has worked with over 20 schools and colleges in her capacity as an NLG and as a professional facilitator/development consultant and carried out many external reviews of governance. Her mission is to help schools/MATs/federations develop a high-performance culture and organisation built on a clear shared vision, values and a team-driven approach.

She has a degree in Educational Psychology and has worked at a senior level in Human Resources in the chemical industry (originally Courtaulds), contributing to significant organisational and cultural change.

Having established Work Vitality in 2007, Sarah now has a wide range of clients including Tarmac, the Vaillant Group, the University of Derby, Lafarge, Vinci Energies and the Volvo Group.

With a background in Human Resources, coaching qualifications and extensive experience of coaching senior leaders, Sarah brings a sharp understanding of how to develop an engaged and performing workplace to her governance system-leadership role.

Sarah’s two daughters both attended Richardson Endowed Primary school in Smalley (now within Embark Federation) and being Derby born and bred, Sarah is passionate about improving the education and life-chances for all children and young people in her home county.

Ian has over 20 years of experience in the IT industry, picking up and utilising technical, project, operational management and sales skills. Ian worked previously for IBM and Hewlett Packard and now for DXC Technology. His current job role is that of a Solution Architect working in the defence sector.

Ian has over 7 years of experience working within School Governing Bodies, ranging from being a Parent Governor, chairing Finance Committees and assisting schools in delivering a Good Ofsted report. He has also participated in the Embark Strategy Group, effectively steering the direction the Embark Federation.

On a personal level, Ian is married, with two children and lives locally to schools in the Embark Federation. He enjoys keeping fit, by running, playing competitive tennis, golf and in the warmer weather, water-skiing!

Alix has worked for 20 years at a large FTSE 100 company, she currently manages a team who look after the Fintech sector.

Alix has been a school governor for 10 years, during that time she has been a governor of three schools and Chair of Governors of 2 of those schools. This included an Infant school which is an outstanding school and Alix was part of the interview process with Ofsted when the school was awarded their outstanding status.  She lives with her husband and 2 children and spends her spare time supporting her son playing for his local football team and also her daughter who is a keen gymnast.

As a leader, Eleanor strongly believes in the fundamental core purpose of education and the importance in the collaboration of a shared vision to the benefit of children. She offers a variety of skills and experience to the Embark trust board providing balance and passion to support school objectives and those of the community.

Originally from Canada, Eleanor offers a diverse background in a career spanning over 25 years across three business sectors in the areas of product and programme development, business administration and operations, training, customer service, safeguarding, performance management and human resources. She has been fortunate to be able to practice her knowledge across the community at local and regional level.

Eleanor holds degrees in Law and Sociology and International Management, certification in multidisciplinary rehabilitation and qualifications in education and training. Trained with the National College and as an experienced integrated centre leader she has have demonstrated practice in Early Years to post 16 and beyond. Eleanor is currently a tutor in family learning and has been a coach to many professionals.

Matthew has six and a half years of headship experience and several years of working as a leader in schools. He is currently Executive Head of Embark Federation in Derbyshire which consists of Richardson Endowed Primary in Smalley and Kilburn Junior School. The Federation launched in January 2017 and he has been headteacher at Richardson Endowed since September 2011.

Matthew has been designated a National Leader of Education in February 2017 as a result of his work as a system leader and Richardson Endowed Primary became a National Support School.

Matthew has worked as an Associate School Improvement Adviser for Derbyshire County Council over the last three and a half years supporting nine schools and their leaders in a wide variety of school improvement activities. All nine schools now have good or better Ofsted judgements.

Matthew has also recently enjoyed working with a ‘coasting’ school in his role as NLE which was assigned by the RSC team.

Both schools in the federation have an exciting curriculum which is accompanied by a rich diet of wider opportunities in Music, Sport, Science and the Arts. The federation has excellent leadership in both schools and very good capacity to support others.

Prior to his work in Smalley, Matthew taught for nine years in two Derby City schools and then for four years as a Deputy Head in Nottinghamshire.

Matthew enjoys playing sports in his spare time and is also a member of the Parish Council Committee of All Saints Church in Breadsall Village, Derbyshire.

David is currently a senior management consultant for Go M.A.D. (Make A Difference) Thinking, a business improvement consultancy working with individuals, teams and organisations, supporting them to deliver transformative results and enabling change.

David enjoys playing sport in his spare time; golf, tennis, badminton and spinning, as well as relaxing with yoga and hiking.

On a personal level, David has been married to Dawn for over 30 years, living in Derby for the majority of that time. Their two sons attended Derby schools, enjoying their academic, musical and sporting experiences. Having graduated as dentists they now work in the NHS and privately in Manchester and Halifax.

Peter has worked in a variety of positions in finance in both public and private sector for over thirty years. He currently works for the Ministry of Defence in procurement for CAAS (Cost Assurance and Analysis Service) producing reports to aid decision making for buying defence equipment and platforms. He has also worked for the Surgeon General as a Financial Controller for the Defence Medical Services and as a Resource Manager for Prime Contracting in Defence Estates. Earlier in his career, Peter worked as a Brewery and Distribution Accountant for Bass Brewers and at British Rail Engineering in Derby.

Peter was awarded an MBA in 2005, studying part-time through the Open University. He also has a qualification in teaching English as a foreign language and has worked in Japan and Indonesia including two years of working with Voluntary Service Overseas.

It was inevitable that Peter should end up working with schools in some capacity as he has a wife who was Headteacher of two schools and worked latterly for the Derbyshire Education Improvement Service as a Senior Advisor. His daughter is a teacher at an Infant school in Sandiacre. As a result, educational issues are in integral part of dinnertime conversation in the Ricketts’ household.

Outside of work Peter enjoys running and cycling. He has recently started doing parkruns – shorter distances being better in old age. He recently achieved a significant milestone by coming first at Rosliston Forestry Parkrun, albeit in the 60-64 age group. Professionally Mark currently works in Comms and Culture for a large retailer with specific responsibility for fulfilment sites. Previously he worked for 19 years within John Lewis and Waitrose covering a range of assurance and human resource roles. This included thought leadership work on future strategies, chairing consultation programmes and working with leaders to develop the culture in their business areas. He is a member of the CIPD and a qualified ACAS mediator.

Mark was a Scout Leader for 20 years supporting young people in inner City Nottingham. He ran a Scout Troop with his wife as well as holding District roles for Scouts and Training and enjoyed planning and delivering the annual summer camps. He then moved to a parent governor role at Ladywood Primary School. He became Vice-Chair supporting the school to maintain their 'good' Ofsted rating at inspection as well as implementing a wellbeing survey for the staff team. He worked with the Head and Chair of Governors to strategically review the school's future which ultimately led to Ladywood joining the Embark Federation Trust.

He joined the Trust Board in 2011 with particular passions for all areas of culture and communications and sits on the School Performance Sub-Committee.

Mark has lived locally for 15 years, is married to Heather and has two sons who have both attended a now Embark school.

My name is Mike Firbank. I began my working life as a Secondary School Teacher in mainstream education. However, that changed over time as I realised that I had a passion for supporting young lives that were broken and in danger of exclusion from school and society. My last teaching post, in Nottingham City, was overseeing both internal therapeutic alternative provision and SEND support.

In 2003 I left teaching and retrained as an Anglican Priest. I spent the next 9 years in Cornwall as a Vicar using much of what I had learned in education. Using a multi-agency approach we set up a day centre for addicts, Foodbank centres and teams to support vulnerable teenagers out late at night.

We moved back to 'England' in 2014 and I began to support and grow chaplaincy teams in the workplace. I'm currently supporting 30+ the churches across South Derbyshire, working with the volunteer sector across Derbyshire, a Chaplain in two Secondary schools and a local Pioneer Vicar in the town of Swadlincote.

It's a privilege to be part of the Board of Trustee.

I especially love the value-based vision, practice, and dynamism at the heart of Embark Federation. 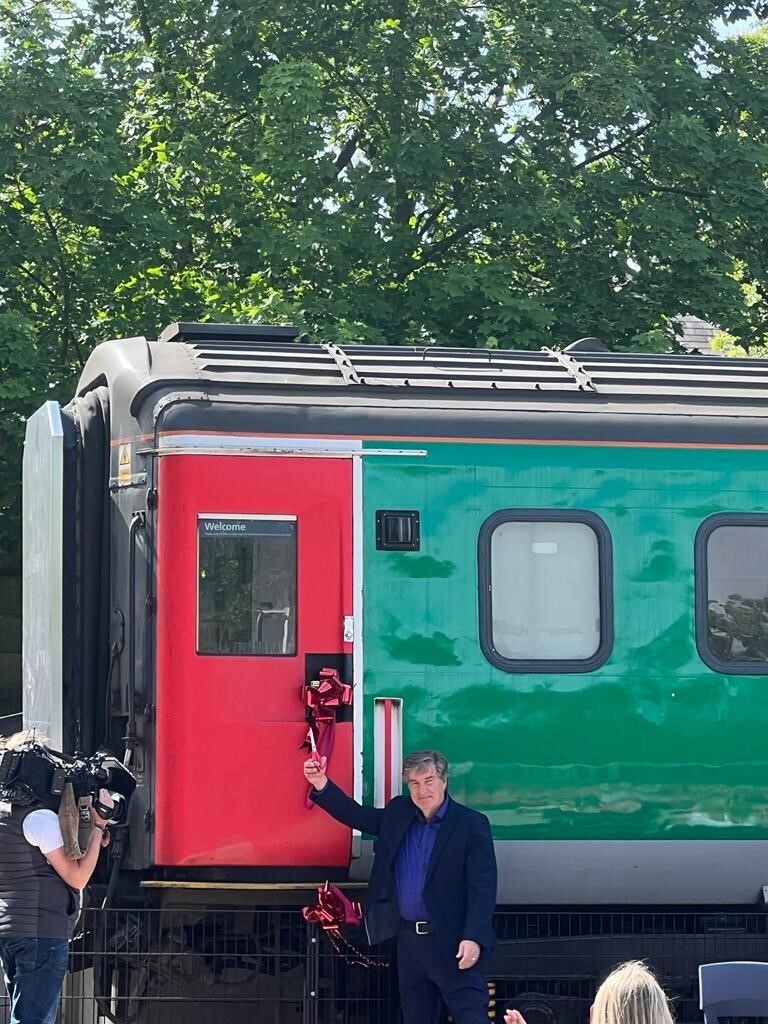 Richardson Endowed Primary had a day to remember last week when they held the grand opening of the Richardson Express. It was launched as Sir David Carter cut the ribbon and there was a brilliant turn... 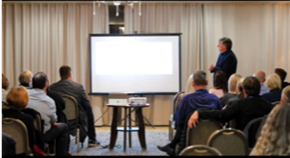 &nbsp; Embark Federation held their first governance networking event which was a great success. It was a chance for our local governors to network with each other and have some excellent input fro... Our Trust Leader Matthew Crawford has paid a special visit to Horsley Woodhouse Primary School today to open their brand-new Library space. The launch of the new library has a primary focus of &lsquo... 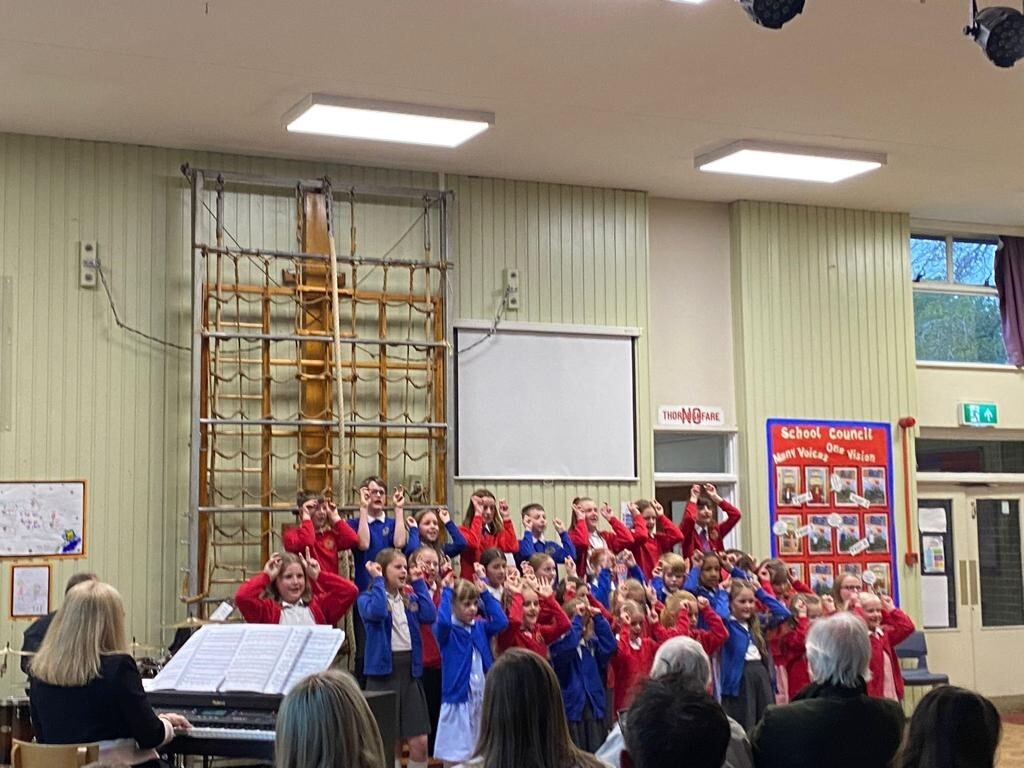 Embark Federation have hosted a very important meeting this evening at our offices. Hugo Valdes-Vera was here to present on a topic that we very much support. Think Ocean is a company who are strivin... 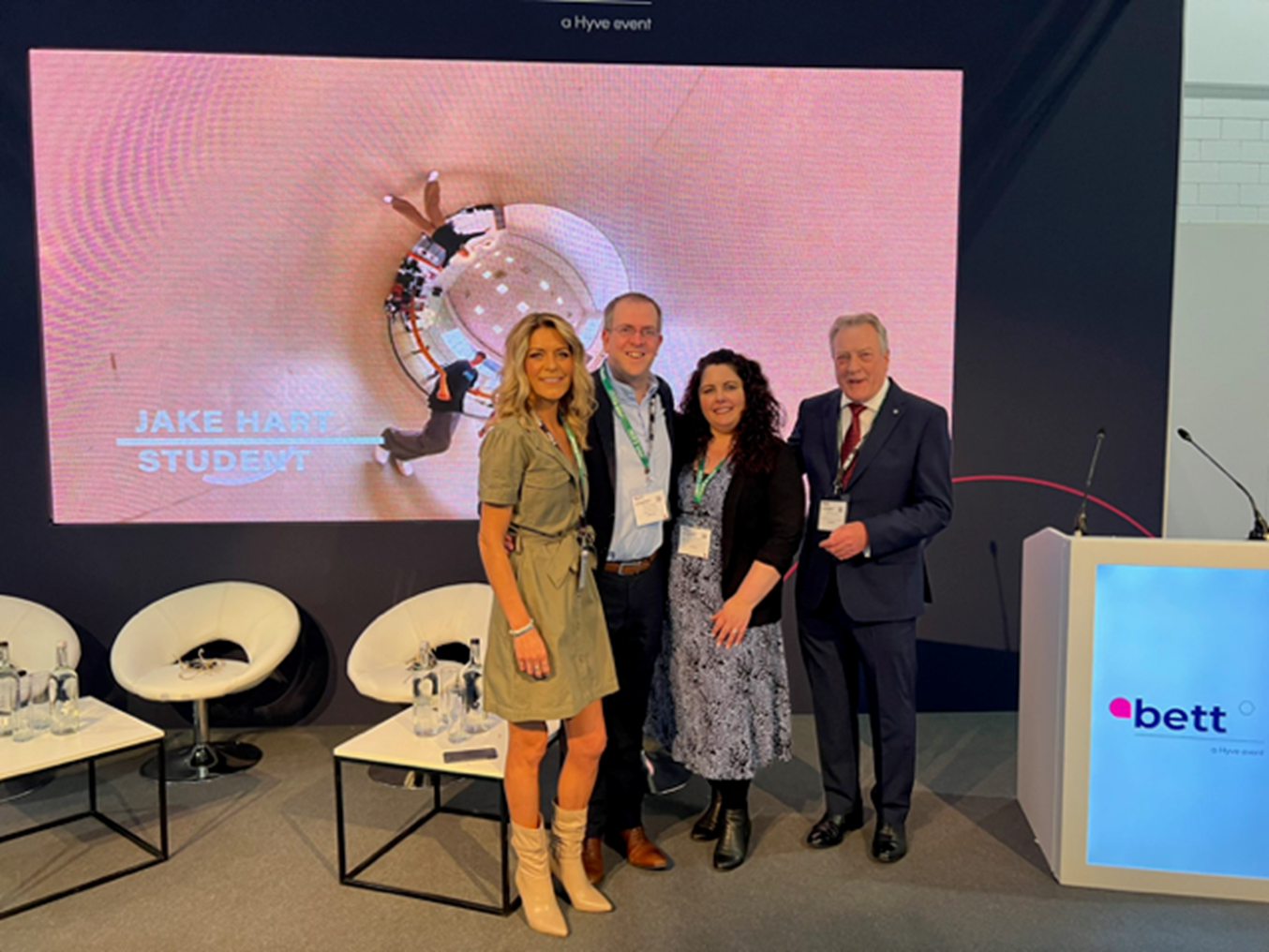 Optimus Summit and the Bett Show

Our Trust Leader Matthew Crawford was representing Embark Federation as a guest Keynote Speaker at the Optimus Conference on Growing and Developing a Trust. Mr Crawford was sharing context from our tr...

Embark Awards 2021 Embark Federation celebrated 108 of our children&rsquo;s achievements during lockdown with our first ever Embark Awards evening. This brought together children and their families f... 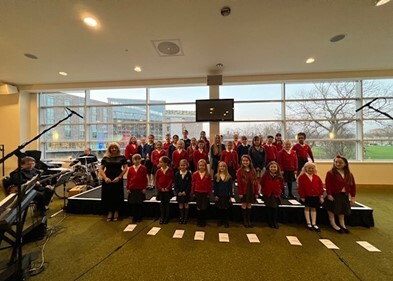 Thursday 24th March Embark and 30 of our children from Richardson Endowed Primary School took a trip to Leicester Tigers Rugby Club to perform at the East Midlands Chambers Celebration of Culture even... 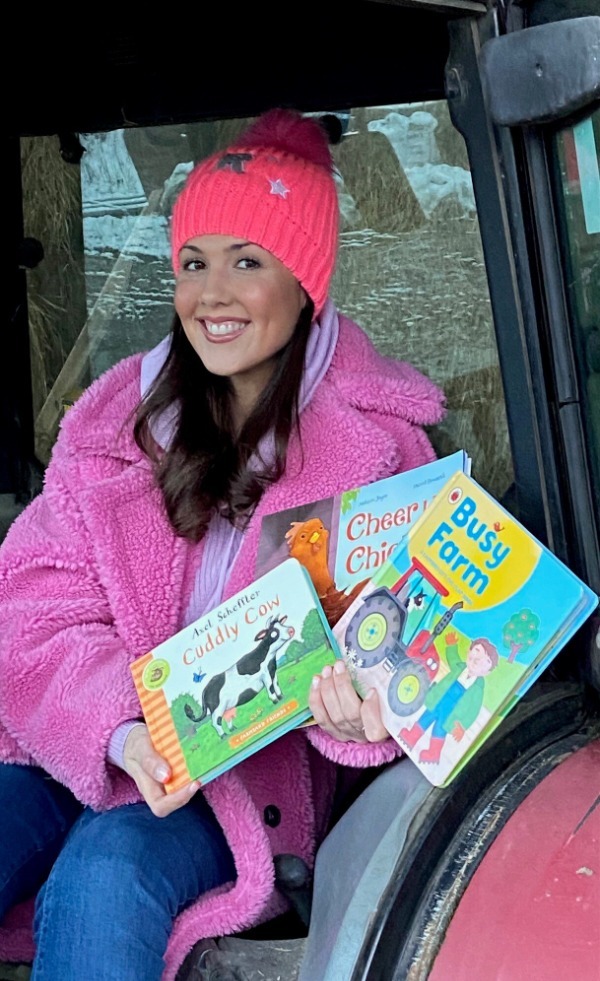 Embark&rsquo;s Fundraising and Events Manager Rosie Mclaughlin started recording a daily story to keep pupils entertained during the second lockdown. Rosie wanted to do something that would help her t... Embark arranged a special treat for all our schools called&nbsp;&lsquo;Christmas&nbsp;isn't&nbsp;cancelled&nbsp;for Embark schools!&rsquo; As part of that we arranged licences for all our children to...